For the client, the company PIP d.o.o. (Ltd.) from Zagreb, within the Entrepreneurial zone in Pisarovina, in the immediate vicinity of Zagreb, in the period between December 2011 and June 2012 a modern business building for the processing, storage and distribution of bee products was constructed. The modern building of RC prefabricated structure contains 2550 m2 of production-storage area, 240 m2 for sanitation of vehicles, approximately 720 m2 of office space and 2600 m2 of landscaped terrain, access roads and parking lots. 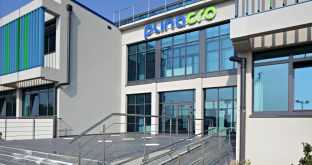 The construction of the administrative building and the storehouse in Ivanić Grad lasted from August 2009  until May 2010. The complex consists of two buildings of which the administrative building was constructed as a monolithic construction with plan dimensions of 31.50 x 13.72 m.
It was built as a two-story building with the total layout area of 1796.44 sqm. The facade of the ground floor and the first floor is articulated by a continuous row of windows with blue reflective glass, while in front of the windows of the first floor there is a curtain of sliding metal panels in light blue color and green which other than having a decorative function is also a sun screen panel. These panels are repeated on the sides of the building also in front of the windows. Under the roof there is a continuous blue sheet metal cornice. The entrance occupies the centre of the building, it is articulated by large surfaces with blue reflective glass on both floors and it has a little staircase and the access ramp for the disabled in front. Above the entrance there is a terrace provided with metal fence and spaces glazed with windows with blue reflective glass behind. The administrative building consists of office spaces. The interior is well lighted, functional and simple, the hallway walls are painted in light blue in the lower part, while the upper part is opened with glass surfaces instead of the ceiling.
The second building was constructed as a prefabricated building with plan dimensions of 88.02 x 15.02 m and the gross area of 1192.00 sqm. Here the storehouse, the atomic shelter and dispatching centre are located . The part of the building intended for dispatching centre is higher than the storehouse, its facade is painted in grey and is articulated by rows of rectangular and square windows, while the hall intended for the storehouse and shelter is lower with the facade painted in white and has larger, longitudinal rectangular window openings. The storage doors, the sheet metal roof above the entrance of the dispatching centre and the roof cornices are made of blue sheet metal, and all the windows have the above-mentioned blue reflective glass. 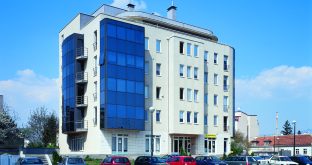 A new five-storey building with a two-level underground garage has been adjusted to the needs of contemporary way of running a business. In modern office spaces, furnished in the latest fashion, several users have been located, and on the 4th and 5th floor the seat of the ING-GRAD Company has been established. 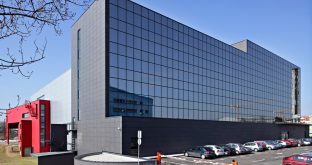 The building of a total surface area of 15435 m² has two underground floors and six floors above ground. It consists of 5952,50 m²of office spaces, 978,50 m² of shopping area, 4707 m² of warehouse distribution area and 3797m² of underground parking garages.
The exterior oft he building is devided in three parts. The front side with entrances, offices and shops has the glass façade and is higher than the other two parts formed in a stepwise manner. The central and the back side oft he building consist of the warehouse distribution spaces. The minimalist and functional design of he building accentuate open spaces and plain surfaces enriched at the exterior by the stepwise structure and in the interior with columns. The construction works were performed from february 2008 until december 2009.